When the foundations for Zobin’s Mill were dug in 1770 on the right bank of Rečica Brook, hot spring traces were discovered, but immediately covered with soil. In memory of that discovery, St Mary’s Chapel was built on Rečica Brook’s left bank, only to be removed after World War II.

In 1846, the Uhlich family, the economically powerful owners of Rimske Toplice Spa, started to take a serious interest in Laško’s springs. 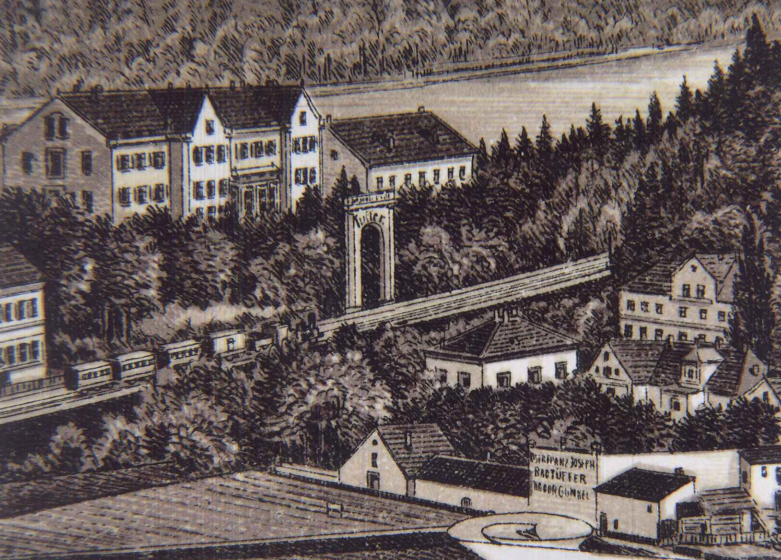 Original engineer Rödel’s plans for the supply of hot water from the local springs to Mill Castle and the Spa are most interesting. He wanted to use three vertical wooden tubes firmly inserted into the springs’ insulated dolomite cracks to raise the hot water to a level from which it would freely flow into the pool, but the water only reached 120 cm above the Savinja River’s water surface. He finally realised that he would have to make a special airtight channel from the springs to pumping devices which would then supply water to rooms at higher levels. He had to route a special water channel from Rečica Brook to the spa’s northern wall where he had installed a large wooden water-driven wheel to help the water pumps push the water towards the spa. This meant he had to buy and demolish Rečica Brook’s Zobin’s Mill. In 1853, a pool (18 x 5 x 1.5 m) with a capacity of 900 hI was completed which could be filled in four hours. At the time, this was the largest of Štajerska’s four indoor pools. On Rečica Brook’s left bank, he built Rödel Villa (Rödelhof) where he lived with his family. Behind the villa, he constructed a long, low-covered hallway with decorative statues and water fountain. At the northern edge, he built an outhouse with a large garden. Next to the rock walls on Rečica Brook’s right bank, he constructed the single-floor Mill Castle (Mühlhof), which resembled the former Zobin’s Mill. There were 24 rooms were at Mill Castle’s disposal.

From the spring on the forest’s slope above Mühlhof Villa, he routed a water supply for the needs of the spa. This water supply, with high quality water, is, after more than 160 years, still being used for Penzion Park’s needs.

The rocky cavern behind Mill Castle was used as a cold room filled with ice from nearby Lava during the winter. This cavern represented storage for drinks and vegetables.

At Mill Castle’s centre, he built a tower floor with an open terrace at the top where flags were flown. This building hosted members of various brass bands and orchestras, along with their wives and children. It also included a barber and hair salon. There used to be a small lake at the front of this building where guests were entertained by white swans, geese and ducks. 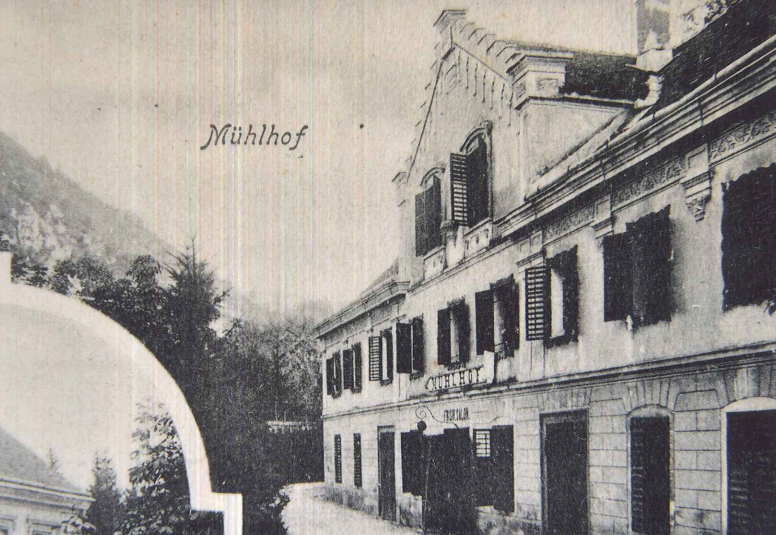 In 1920, the Huda Jama Coalmine was recommissioned; a mine railway and tunnel through the rocks near Mill Castle were also constructed. Pursuant to levelling for the railway line, the area was covered with waste, meaning the end for the renowned holiday hiking trail to Rečica Brook. Lava, which represented the source of ice, was also covered. After World War I, poor tenants populated Mill Castle, even though it was completely deteriorated due to a lack of maintenance. In 1927, this renowned building was demolished; Master Builder Srebot built his house at Laško from Mill Castle’s remains.

In 1989, an idea for the revitalisation of this area came to life. With the help of Zdravilišče Laško Spa, the sports tourism complex Penzion Park was built, opening in 1994.

Interestingly, we can also mention that during construction of the current Penzion Park that we found a deserted mine shaft from which we preserved a part of the wooden pillars.